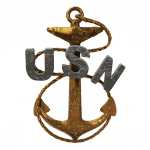 We Make It Easy To Go Custom

Just as you've served your country, we want to serve you. We make it easy to get in contact, and typically respond within 3 business days to collaborate with you in developing your Custom Challenge Coin. We proudly work with customers currently deployed in challenging theaters and are able to meet your deadlines and requirements. All Photography on PnR has been been shot by Millwood Ridge Photography and is subject to copy right protection.